Home Events A Black Swan Event? Implications of COVID-19 for Damages and Valuations in International Arbitration 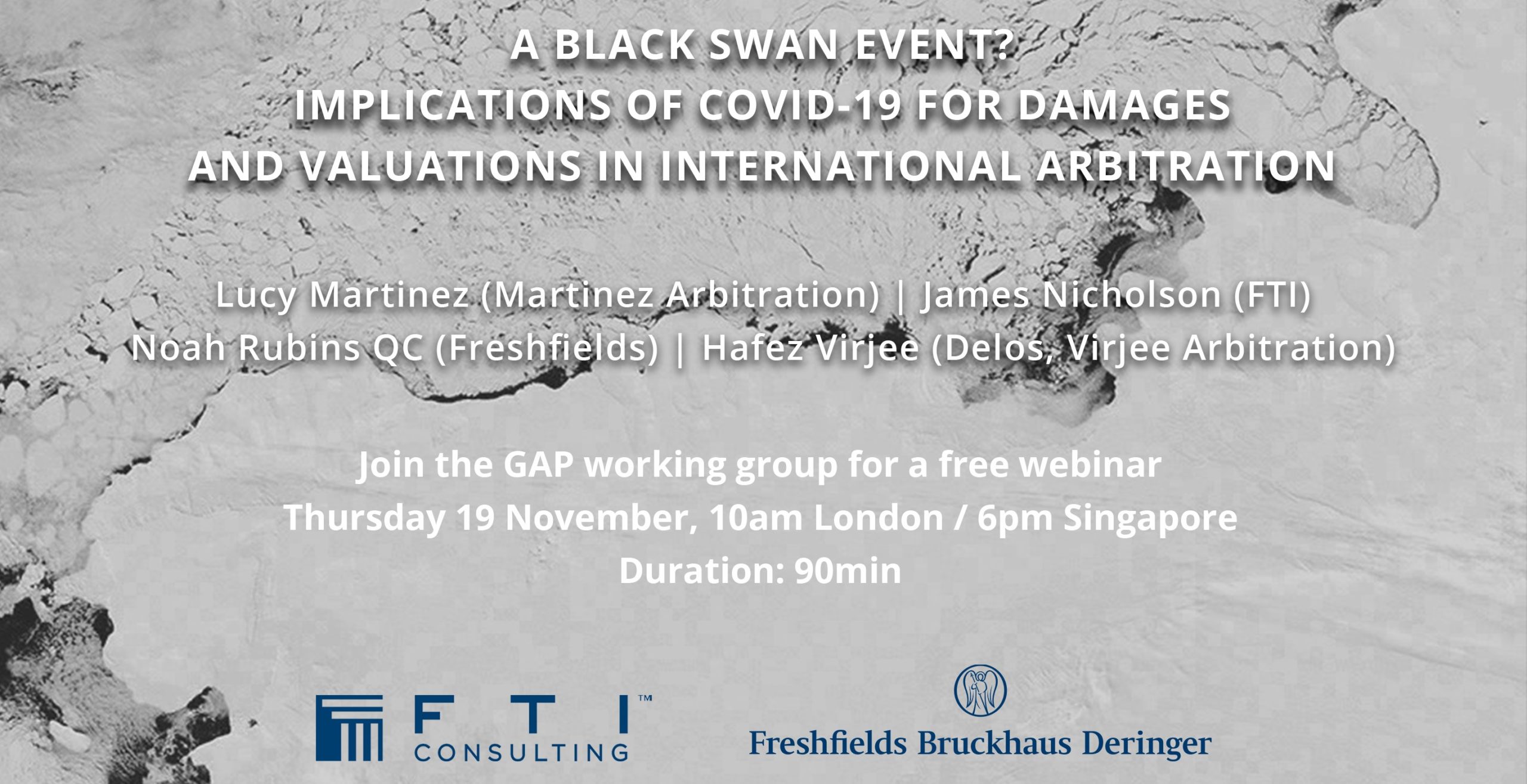 A Black Swan Event? Implications of COVID-19 for Damages and Valuations in International Arbitration

took place on 19 November and was part of the GAP Symposium 2020. It was organised by Delos in conjunction with FTI Consulting and Freshfields Bruckhaus Deringer.

The recording is available here.

Lucy Martinez is an independent counsel and arbitrator, based in Australia and the UK.  She has extensive experience representing private and sovereign clients in disputes relating to investment treaties, contracts, and national investment legislation, including in AAA, ICC, ICSID, LCIA, UNCITRAL, and ad hoc arbitrations.  She has sat as arbitrator (sole, co-, and presiding) in ACICA, HKIAC, ICC, LCIA, and SIAC disputes, seated in Australia, Hong Kong, London, and Singapore.  Her industry experience includes energy (oil, gas, electricity, mining), telecommunications, satellite technology, banking and finance, insurance and reinsurance, trademarks, shipping, and gambling.  She has been recognized in Who’s Who Legal: Arbitration, and Future Leaders (Most Highly Regarded Individuals) (2017-2021), along with UK Legal 500: Dispute Resolution/ Public International Law (2016) and Next Generation Lawyer (International Arbitration) (2017).  She also advises on various international pro bono projects.  Please see www.martinez-arbitration.com for more information.

Noah Rubins QC is the head of the international arbitration group at Freshfields Bruckhaus Deringer’s Paris office and also leads the firm’s CIS/Russia Dispute Resolution Group. Noah has advised and represented clients in arbitrations under ICSID, ICSID Additional Facility, ICC, AAA, SCC, LCIA, ICAC, and UNCITRAL rules. He specialises in investment arbitration, particularly under the auspices of bilateral investment treaties and the Energy Charter Treaty and has also practiced law in New York, Washington, Houston, and Istanbul. He has served as arbitrator in over 40 cases, including two investment treaty disputes adjudicated under the UNCITRAL Rules and one under the ICSID Rules. Noah has published widely in the field of arbitration and is a frequent conference speaker. His publications include Investor-State Arbitration (2nd edition, with D. Wallace and B. Sabahi) and International Investment, Political Risk and Dispute Resolution: A Practitioner’s Guide (2nd edition, with T. Nektarios Papanastasiou and S. Kinsella).

James Nicholson leads FTI Consulting’s Economic and Financing Consulting business in Asia. He has 25+ years’ experience as a consultant on matters of finance, strategy, and economics. Since 2005, his work has primarily involved issues of the identification and valuation of lost profits, and the valuation of businesses, financial assets including shareholdings, and other assets, and of wasted costs. He has testified 35+ times, of which four virtually, before commercial and investment treaty arbitration tribunals, the Singapore High Court, and the Singapore International Commercial Court. James is President of the Standing Committee of the ICC’s International Centre for ADR, which advises the Centre in the application of the ICC’s Expert Rules, and a member of the Executive Committee of the Foundation for International Arbitration Advocacy (FIAA).

Hafez R Virjee is the President and a co-Founder of Delos. Hafez also serves as an independent arbitrator at Virjee Arbitration. He previously acted mainly as counsel. His clients have spanned the range of private equity firms, tech start-ups, industrial concerns, listed companies, State entities and treaty organisations, in disputes across a wide range of sectors and relationships, including shareholder agreements, joint-ventures, agency, M&A, telecommunications, tech, energy, pharmaceutical, construction and defence. Hafez is a solicitor of England & Wales and also qualified in France. He was previously at Dechert in Paris (with a secondment to Dubai in 2015) and prior to that at Freshfields Bruckhaus Deringer in London. He co-edits the Delos Guide to Arbitration Places (GAP) and regularly writes and speaks on international arbitration and legal risk management. He holds degrees from the University of Cambridge (M.A.), the Université Paris II – Panthéon-Assas (Maîtrise) and the University of California – Berkeley (LL.M.). He is listed among the Future Leaders of Arbitration by Who’s Who Legal.