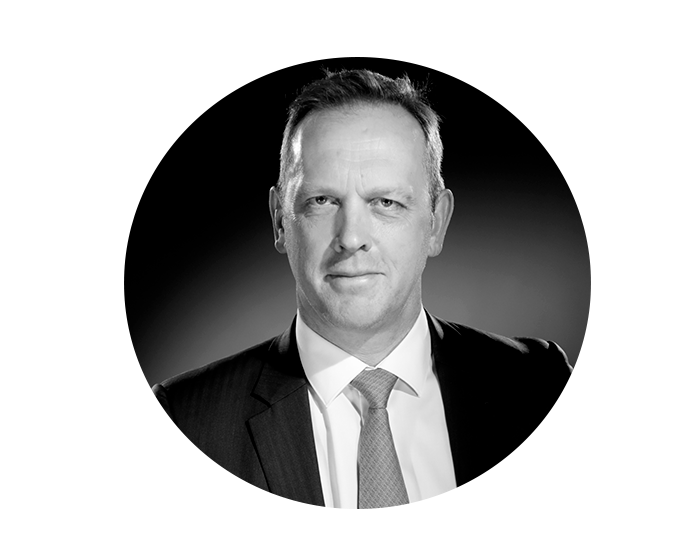 By September 2020, Microstrategy CEO, Michael Saylor, realised the company had a problem. By his calculations, due to inflation and excessive central-bank money printing, the real yield on Microstrategy’s sizeable cash reserves was negative 10%. Saylor described the technology company as having a “$500 million melting ice cube.” His solution? Saylor exchanged the cash for Bitcoin and has been a buyer ever since, even to the point of issuing debt to acquire more. He is a firm believer that holding cash is far riskier than holding Bitcoin due to the latter’s inherent scarcity – only 21 million will ever be mined.

In some ways, the construction industry has the exact opposite problem to Microstrategy. Instead of worrying about how to preserve the value of cash reserves, construction companies actually experience poor cash flow, arising from payment delays, cost overruns, low profitability, and disputes between parties. [1]

According to a recent survey of construction company owners, [2] 84% said they had cash flows problems from time to time, 20% said cash flow was a constant issue, and only 8% get paid on time. It may therefore come as no surprise to learn that, according to UK statistics, the construction industry has the highest percentage of insolvencies of all industries. [3]

Before discussing stablecoins specifically, however, we need a brief refresher/introduction to smart contracts and cryptocurrency.

Smart contracts and cryptocurrency within the construction industry

Many articles have been written about how smart contracts [4] could revolutionise the construction industry. [5] At the risk of over-simplification, smart contracts aim to improve efficiency, reduce disputes and add transparency. When a contract automatically self-executes as a result of certain conditions being met (e.g., materials are delivered on-site, an agreed-upon milestone deadline is met), there is no need for anyone to enforce the terms of the contract. This would allow, for example, for prompt payment to be made without recourse to a judge or an arbitrator.

In the legacy banking world, however, “prompt payment” can still involve significant time and money, particularly if there are cross-border payments to be made, if it is a weekend/ bank holiday and the bank is shut, etc. For this reason, it may make good sense to consider incorporating cryptocurrency within the smart contract.

A cryptocurrency is a digital currency designed to work as a store of value and a medium of exchange; they are recorded on distributed ledger technologies/blockchain and are cryptographically secured. Among the benefits of this technology are that transactions may be settled near-instantaneously, there is no risk of double-spending, and there is no need for a central authority/ intermediary to ensure settlement takes place. Unlike with the legacy bank system, therefore, transactions using cryptocurrencies can be made on a 24/7 basis, can be significantly cheaper, and are fully transparent (since recorded on the blockchain).

Having explained certain basics, we now need to turn to selecting an appropriate digital currency for our smart contract. Although the author is a great fan of Bitcoin, one of its drawbacks is the sheer volatility in price. In October 2020, for example, it traded at around $10,000 per Bitcoin; the price rose to over $60,000 in April 2021 before retracing to around $29,000 in July 2021. It then hit an all-time high of $69,000 four months later in November 2021 and is currently around $30,000. Talk about a roller coaster! Clearly, it is hard to advocate for the use of Bitcoin in a construction (smart) contract if there remains fundamental uncertainty about the value (in fiat currency terms) of the eventual transaction.

Stablecoins were invented as a response to the need for a non-volatile cryptocurrency to facilitate everyday transactions. A stablecoin is a type of cryptocurrency that attempts to peg its price to an external reference point, usually a fiat currency or commodity. Unsurprisingly, given the importance of the US Dollar as the world’s de facto reserve currency, the overwhelming majority of stablecoins are pegged to the US Dollar.

Although a full guide to stablecoins is beyond the scope of this article, in general, there are three types of stablecoins:

(i)   Centralised stablecoins - these coins are issued by a centralised authority and are purportedly fully backed by physical cash/cash equivalents, or commodities. They currently account for the largest share of the market by value. Examples: Tether, UDSC.

(ii)   Crypto-collateralised stablecoins – as per the description, such stablecoins use other digital cryptocurrencies as collateral. Example: Maker DAO.

(iii)   Algorithmic stablecoins – these types of stablecoins are not directly backed by collateral but rather use smart contracts and an algorithmic mechanism to maintain the peg. Algorithmic stablecoins have historically had a high failure rate. For a while it seemed that one ‘algo’ (UST, issued by Terra Luna) might prove to be the exception, but it collapsed spectacularly in early May 2022. One possible reason for the failure of Luna was the decision of its founder, Do Kwon, to back this stablecoin with Bitcoin, a highly volatile asset.

The recent growth of stablecoins has been nothing short of phenomenal. As a result of a surge in adoption and demand, the total value of all stablecoins has increased from $1 billion in 2018 to around $160 billion today. [6] 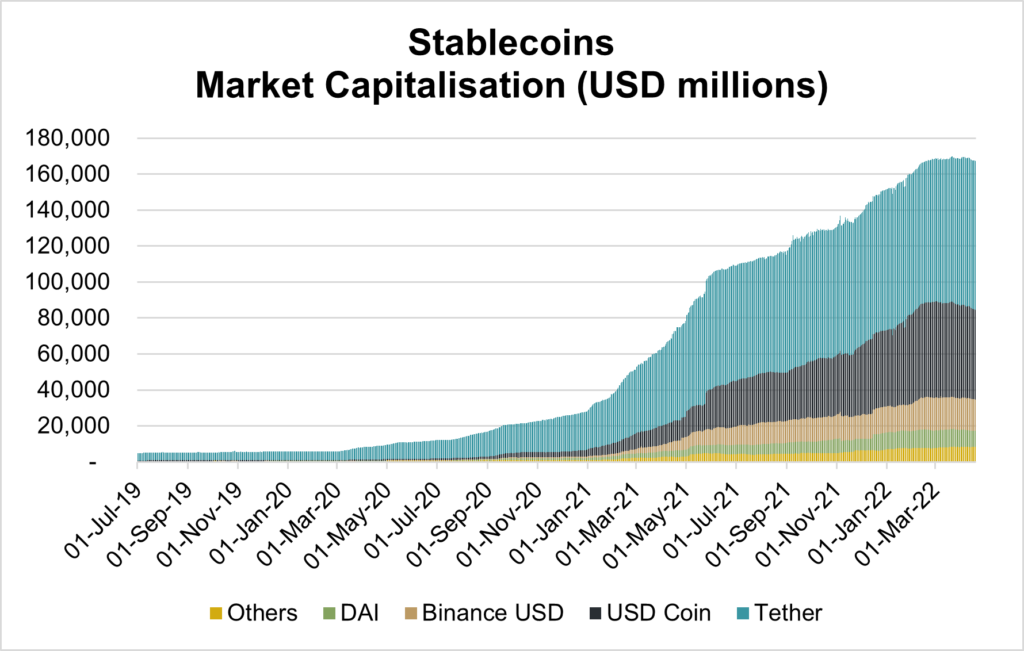 Initially stablecoins were mostly used to purchase other cryptocurrencies on exchanges that were not connected to the banking network. Today, the use cases for stablecoins have greatly expanded; they are used for regular online payments, decentralised finance, gaming (e.g., in-app purchases) as well as crypto trading. With the advent of a new digital age, it seems likely that the market for stablecoins will grow exponentially.

Why stablecoins could benefit the construction industry

We have already explained why it might be beneficial to incorporate cryptocurrency within smart contracts, that stablecoins offer a non-volatile medium of exchange, and are cheaper and quicker than the legacy banking system allows. Beyond these advantages, however, are others which we discuss below.

(a) Stablecoins can easily be converted to and from fiat currency.

Due to advances in banking and network technology, it is relatively easy and cheap to switch between digital and physical forms of cash on a cross-border basis. For a construction company employing an army of foreign labour, for example, payments can be made efficiently to individuals via mobile banking. This can be especially beneficial to foreign workers who may not have traditional bank accounts. Such workers can then send money home using the same technology, without incurring the hefty fees of traditional money transfer agents.

(b) Stablecoins can provide high yield.

In today’s low interest rate environment, the returns on deposits in a ‘traditional’ bank account are meagre. Companies can use treasury management (e.g., overnight deposits) to maximise their returns, but will likely struggle to outpace banking fees, let alone inflation. One of the attractions cryptocurrencies offer is the yield/return that can be generated by staking digital assets. Today, there are countless different strategies one might pursue in the quest for generating yield; the choice of strategy will depend as always on one’s risk appetite and how long one is prepared to lock up funds.

Higher yields than the above are advertised on a variety of platforms, although the inevitable trade-off is assuming significantly greater risk.

It does not take much imagination to see how stakeholders in the construction industry could benefit from generating yield on stablecoin deposits. In a long-term construction project, for example, contractors/owners could earn a return on deposited funds until such time that these are released (e.g. when the conditions of a smart contract are met).

It is easy to forget how recently cryptocurrencies were invented. The Bitcoin whitepaper, which launched the world’s first and largest cryptocurrency, was only written in October 2008. Stablecoins are more recent still, with the first one invented only in 2014.

As a result, this is a technology that is still in its infancy, with much risk and uncertainty remaining about fundamental issues such as regulation. The collapse of algorithmic stablecoin, UST/ LUNA, in May will no doubt deter would-be participants in this new technology for some time to come. It is understandable that many will wish to exercise caution before taking the sort of leap of faith Michael Saylor took when he invested all of his company’s cash reserves in Bitcoin.

Putting that aside, however, the genie is truly out of the bottle and cryptocurrencies are likely to continue their incredible growth. For the reasons outlined in this article, it seems stablecoins may well offer a compelling solution to the chronic cash-flow issues endemic to the construction industry. Who Dares Wins?

Anthony Charlton is a partner of HKA, based in Paris. He has over 25 years of specialist experience in the quantification of damages claims in international commercial and investment treaty disputes, contentious valuations, expert determinations, shareholder/ joint-venture disputes, financial and fraud investigations, and other types of forensic accounting assignments. He has provided oral testimony in approximately 30 cases. Follow on LinkedIn.

[2]   A survey by TSheets (a quickbooks company) of 195 construction company owners.

[3]   According to ONS monthly insolvency statistics, 18% of all UK insolvencies between January 2019 and December 2021 were in construction. This compares with 13% for the hospitality & food sector and 8.4% for general manufacturing.

[4]   A smart contract is a self-executing contract with the terms of the agreement between buyer and seller directly written into lines of code. The code and the agreements contained therein exist across a distributed, decentralized network. The code controls the execution, and transactions are trackable and irreversible. Source: Smart Contracts Definition (investopedia.com).

[5]   See, for example, Smart Contracts – Will They Change the Construction Industry? (flemingconstructiongroup.com).

[7]   Circle | Institutional-Grade Crypto Yield. According to the product owner (Circle), this offer is ‘institutional grade’ with a ‘Clear regulatory framework’ and benefits from being ‘overcolleralized with bitcoin collateral.